A couple of tidbits I unearthed...

First, the communique, or whatever it was. Tom and I were promoted to the position of general manager. And, no, I never washed dishes at Frick 'n' Franklin's. 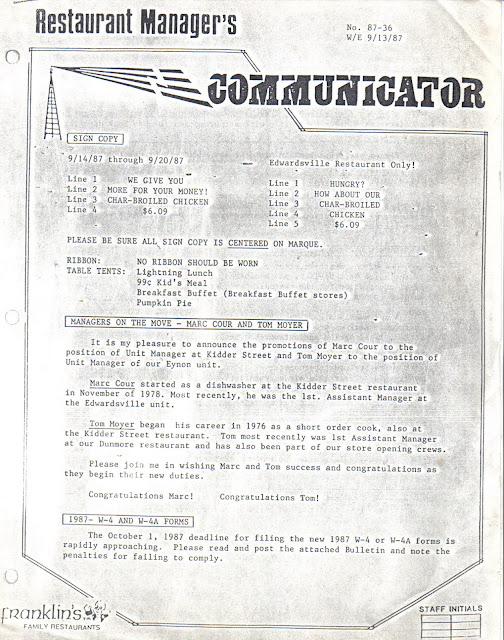 Next, my last schedule as a short-order at Kidder Street (#3), as I was off to hold the fort at the soon-to-open South Main Street (#8) store. 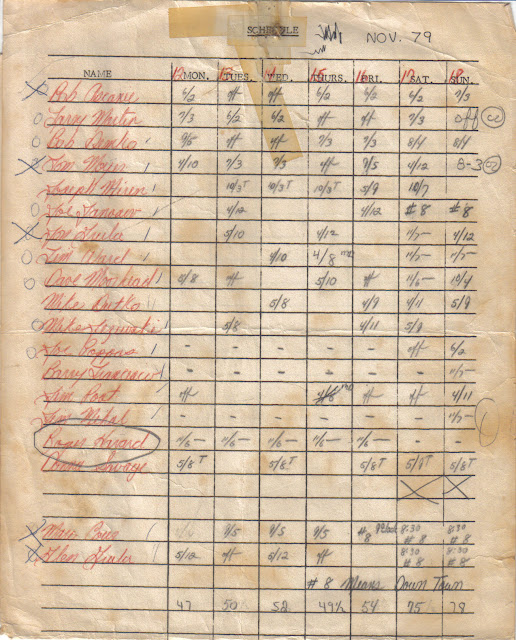 Remember this picture taken by my brother during the summer of 1988?

No, well, it doesn't matter.

I previously stated that I am the keeper of all things Franklin's Family Restaurants, and below is some proof. 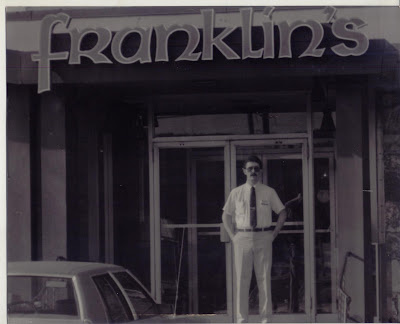 Now take a look at the previous picture again and look at the logo poised above me. Yep, that's that Big Blue F. 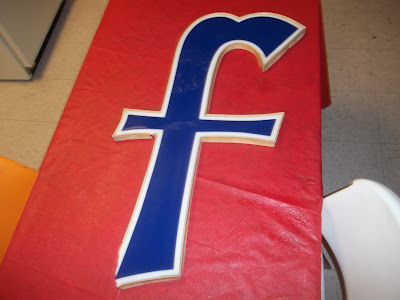 Later
Posted by zorcong at 7:26 AM No comments:

EDWARDSVILLE - A Sunoco storage facility is expanding after the company demolished a closed Mark II Family Restaurant on Route 11.

Sunoco is planning to make the now-vacant lot part of a driveway for a storage facility next door, Sunoco spokesman Joe McGinn said.

Another bit of Franklin’s history was hauled away earlier this week as Unit #1---the original Franklin‘s---met the wrecking ball.

Yes, I did a stint there as an assistant manager in 1985 in the months leading up to the store’s front-of-house being totally remodeled. And, yes, you know why I was sent there, to either get the kitchen up to speed, or to get the kitchen staff to walk.

I never met a more defiant group of cooks, Jolly Green Giants all! Once the management of the store lost control of this group, only an outsider could come in and go all Sergeant Hartman (Full Metal Jacket) on them. I played the role perfectly, albeit very loudly, very grotesquely and very theatrically.

Anyway, once the store reopened, we had us a professional kitchen and prep staff doing darn near everything according to specifications.

A bit of history

Edwardsville had what was called the “side kitchen,” which during the ‘80s consisted of some little-used low-boy freezers and tons of counter space. But back in the day when the store first opened it’s doors, the side kitchen was used to serve the customers that had opted for the curb service that was offered to those who parked alongside the south side of the building.

Yes, waitresses actually went out to the curb, took the customer’s orders and then called the order in to the side kitchen. The side kitchen menu was limited to burgers and sandwiches and the like, but the curb service was quite the popular novelty back in the good old days.

During the annual Franklin’s Swim Carnival back in 1982, I filled in at this store on a Sunday morning, my first ever brush with the precursor to today’s point-of-sale cash registers. On the fly with a waiting line staring me in the face, it was like trying to teach Pig Latin to a deaf person in thirty minutes or less.

The other thing that morning that stood out was the breaking news that some lunatic in Wilkes-Barre had gone off the proverbial deep end by killing 13 people with an array of automatic weapons.

Once the auditing department audited our checks from Kidder Street, it was learned that the shooter, George Banks, had lunch at our store only hours before the mass murder and left a complimentary comment of the backside of his guest check. A comment, by the way, that had investigators and prosecutors interviewing the employees that had come in contact with him that afternoon.

He wrote, “It’s nice to go into a restaurant and not be treated like a ni**er.”

And when you consider that perceived racism no matter where he looked led him to mass murder only hours later, that has to be the ultimate in customer compliments. At least, one you should never forget.

Posted by zorcong at 8:36 AM No comments:

Uploaded by TechnerVideo on Jan 13, 2012
Franklin's Family Restaurant at Cottman and Roosevelt Boulevard. Spring 1988 photos with manager John Banks on the phone during a January 1984 recording. Franklin;'s was a chain of 12 restaurants of Marvin Franklin Enterprises centered in the Wilkes-Barre / Scranton area. This store, unit #10, was in Philadelphia. It opened May 16, 1980 and closed May 16, 1988. Previously, it was a Linton's Restaurant. Afterwards, it became a Friendly's for20 years. It is now the Four Seasons Restaurant.

Mark
Posted by zorcong at 3:01 AM No comments:

If you once toiled away at a Franklin's Family Restaurant, these links could be of interest to you.

From the Wilkes-Barre Times Leader...

After 26 years, Friendly's closes it's Dallas location
From the Scranton Times-Tribune...

Twenty years ago, Friendlys had almost 1,200 units, and uniquely, all company-owned. No franchises. Now they have less than 500. Sad.

Then again, there was this Wilkes-Barre-based restaurant manager some 25 years ago who told those self-impressed boys from Wilbraham, Massachusetts that neither their sub-par menu items nor their ridiculous penchant for cooking out of microwaves would cut it. Yup! That was your author.

Mark
Posted by zorcong at 3:45 PM No comments:

From the email inbox: Cottman Avenue

Sorry I ain't been around here much. I have other stuff to do like another site, a growing family and a career.

Anywho, look at what arrived in the email inbox...

I worked at unit #10 on Cottman Ave. from October 1982 to January 1988. Dishwasher/Busboy, Short-Order cook, Host, Breader, Janitor and Assistant Manager. I was hired by Scott Davis, the GM, who was raised in Dallas, Pa. His assistants were Jerry Torr, a volunteer fireman and chimney sweeper; and Mark Havarilla and Jim Muholic. During the summer of 1987, I did a stint as Asst. Manager at unit #9 in Montgomerville with Bob Strachko.  Paul Kutney was the District Manager and was not a very nice man. Attached is a photo of Franklin's unit #10 on Cottman Ave. in northeast Philadelphia. It became a Friendly's shortly I took this early 1988 photo. 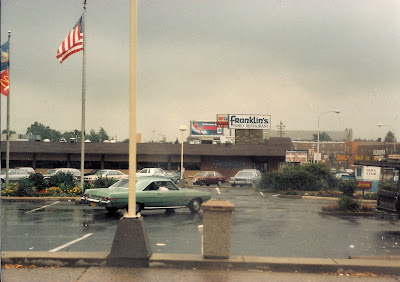 Listen, you have to help me. I was sent down there all by my lonesome to supervise the cleaning up, the packing up and the shipping out what we felt we needed to save and redistribute. I do not remember any remaining member of that management staff still being employed there, but there was a JXXXXXXXX Rushton.

I was sent there to close the place inside of a few days, and had the cops there three times. Let's see, my duffel bag full of bootleg cassette tapes was stolen in-house. Got it back.

By the way, I was also sent in to shutter #12 at Allentown when it's conversion date rapidly appraoched.

But getting back to #10, I told some dishwasher to discard a case of borderline usable tomatoes and before too long, a horse cop appeared at the back door looking to bitch at whoever was in charge. Turned out, rather than pitch the tomatoes into the garbage hopper as he was instructed to do, that dishwasher decided to toss them at the McDonald's next door.

And then there was the irate black kid who demanded his last paycheck on the spot, a good week or so before payday. I mention that he was black because he was wearing a Boston Celtics jersey in Philadelphia. I was impressed and figured he had to be one tough out when it came to street-fighting.

I actually cooked with Mark Havarilla at #3 on Kidder Street in Wilkes-Barre before we were both transferred our separate ways. And believe it or not, despite working in a whole other industry, Paul Kutney is my present-day district manager. Yep, he also made his escape from the hospitality industry.

Oh, yeah. When I first entered the store upon my arrival, I was wearing jeans and a T-shirt with a Franklin's logo on it. And the first thing I spotted was two waitresses leaning against the salad bar, both of which were smoking.

I approached them, told them who I was and why I was there, and that they should be smoking out of the view of customers. And one of the two told me to go fu>k myself. You see, with the end of the store being near, quite a few of the employees on the scene didn't really give a flying flunk anymore. Something that became quite obvious to me after inspecting the unit.

And I'll never forget asking why there was a bed set up in the basement. And I'll not share the answer here.

Drew, feel free to send me your thoughts and your stories, and especially any pictures you may still have.

As far as I know, this was the only Franklin's parade float to ever have been hauled through a parade route.
Since we were new to downtown Wilkes-Barre, we participated in the 1979 edition of the Wilkes-Barre Christmas parade.

The pictures were taken in the shadow of the Pepsi warehouse on Hill St., as the parade participants were being lined up in the proper order.

If you look real close like, you'll notice that Ben Franklin has a Marlboro in his fingers. These days, you'd probably be arrested for daring to light up anywhere near a parade. Or should I say, near the children.

That's Fred DuRoss sporting the reindeer costume. And if you've ever laid eyes on him, you know it was a good decision to cover him from head to toe.

I could name just about every employee in those pics, but I will take a pass on doing as much.

Mark
Posted by zorcong at 12:32 PM No comments: 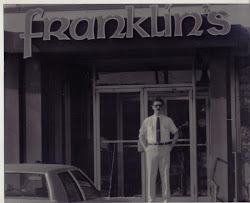